After a remarkable career as a nationally recognized leader in population health and impact-oriented science, Dr. Roy Cameron, Executive Director of HRI, has announced that he will retire on August 28, 2020. 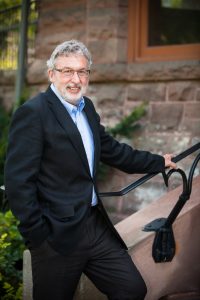 “When Roy joined HRI in 2012, we could not have imagined where he would take the organization in eight short years,” says Dr. Ron Schlegel, Director and Chair of the HRI Board.

“He has fostered a spirit of collaboration that has woven HRI into the national landscape and brought people together to drive change for Canadians living with mental illness and addiction. He has been especially effective in identifying and developing partnerships with other institutions. We are deeply grateful for his leadership and contributions.”

Dr. Cameron spent much of his academic career in the Faculty of Applied Health Sciences at the University of Waterloo, where he retains the title of distinguished professor emeritus in the School of Public Health and Health Systems. A former visiting scholar at Stanford University who studied clinical psychology at the University of Waterloo and interned at Duke University Medical Center, Dr. Cameron has long been recognized as a Canadian leader in understanding tobacco control programs and policies. He has worked with organizations including the Canadian Cancer Society, Canadian Institutes of Health Research (CIHR), Heart and Stroke Foundation and the Public Health Agency of Canada to establish and develop the field of population intervention research. He helped to develop the Canadian Tobacco Control Research Initiative as well as the Population Health Intervention Research Initiative for Canada. In 2007, he was one of just 10 scientists to receive the National Cancer Institute of Canada’s Diamond Jubilee Award, which recognizes researchers who have made outstanding contributions to cancer research in Canada over their careers.

“Dr. Cameron has been a pioneer at the nexus of research and practice in Canada,” says Dr. Martin Taylor, HRI Board Director and Executive Director of the Canadian Research Data Centre Network.

“In my experience, there’s a lot of rhetoric surrounding that relationship. Not many people have been able to make the connection tangibly real, but Roy is one of those people. His legacy is large, and he has carved a clear path for HRI and others who will better the health of Canadians through the continual improvement of policies and treatment services.”

The HRI team extends our sincere appreciation to Dr. Cameron for his outstanding leadership since 2012. The organization will carry forward the culture of cooperation and collective impact that Dr. Cameron has nurtured among team members and stakeholders as we move forward.

Best wishes for your retirement, Roy!