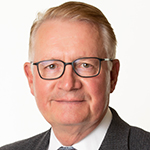 Dr. John G. Kelton is a Distinguished University Professor and Executive Director of the Michael G. DeGroote Initiative for Innovation in Healthcare at McMaster University in Hamilton. He entered his current role in 2016, after completing a 15-year term as McMaster’s Dean of the Faculty of Health Sciences and Vice-President for Health Sciences. He also served concurrently as Dean of McMaster’s Michael G. DeGroote School of Medicine.